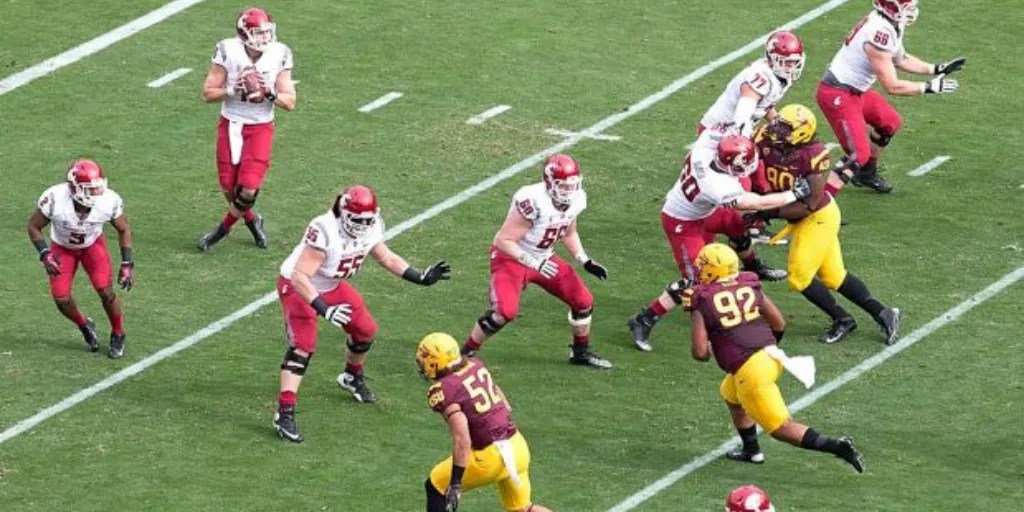 This article was written by Phil Vogt, author of the book The Speed-T Offense. It can originally be found on thecoachvogt.com. In this article, Coach Vogt breaks down Air Raid concepts and how to apply them to your offense.

Using a simple quick passing attack in a run first offense can keep the defense on its toes.  This article is an excerpt from my book “The Speed-T Offense”. This concept can be used in any run first offense from flexbone/SBV to single wing, but if you are interested in checking out some wing-T stuff, you can get my book HERE!

The passing game covered here will be to use in addition to your current play action passing attack.  The purpose here is to put in something that is super simple but still effective.  Most of your time will be dedicated to your run game, and play action passes.  This needs to be something that is inexpensive yet will yield good results.  For that purpose, we are going to steal a concept directly from the Air raid offense so frequently seen in offenses today.  So, all that said, let’s dig in.

The play call is going to set the formation AND the protection with one word.  We will use the words “red”and “blue” for the sake of this article, but you can obviously use whatever word you would like. Red will be 3×1 right, with protection set right.  Blue will be 3×1 left, with protection set left.  Next, you will say a number: one, two or three.  This will tell the receivers what to run. THAT IS IT! The play is called.  Here is a look at an example of each one:

Red and Blue are your protections and formations.  A simple half slide will suffice for this, half slide is covered in depth in my BOOK.  Big on Big can work, but will require a lot of work fundamentally.  Half slide is easy to do and simple to teach, in a future article I will speak on half slide as a base pass protection.  If you want to get even easier, go full slide, however, you will need to have a fullback that likes to take on defensive ends.  There are not too many of those out there, but if you got one, full slide is the way to go.  But if you already have a base protection for drop back passing…. just use that.

The routes are going to be determined by the number that is called. As a base rule, EVERY receiver will have a five yard hitch.  This means they will run to six yards, turn back in to the QB and stop when they get back to five yards.  Every receiver will assume that they are getting the ball.  If the number of the corresponding receiver is called, he will then have a vertical route. (If your QB is a good one, then your WRs can run option routes. I prefer corner/post for that) On his fifth to sixth step the vertical should be looking for the ball if he is an inside receiver.  If he is an outside receiver, he will look for the ball on his seventh to tenth step.  The number “1” will be the outside receivers.  The number “2” will be the Z.  The number “3” will be the A.  If their number is not called, then they have a hitch.  Your quick screens can be used in this series as well.  This may be the simplest pass game in America right now, Hitches and quick screens… combined with your normal ground and pound offense, you will need no more.

The QB only has three seconds to get rid of the ball.  If he has not gotten rid of the ball in that time he will throw it out of bounds or take off with it.  He WILL NOT throw a pick! If he can help it, he will not get sacked, or at least make it back to the line of scrimmage.  Where the QB will go with the ball is going to be determined pre snap.  He is looking for a hitch to be open pre snap.  When he identifies him, that’s it. That is where is going with the ball, catch the snap and get it out there.  If there is not a hitch open pre snap, or an obvious post snap movement to take it away, he will go to the vertical.  If the vertical is not there, he runs the ball or throws it away.  Very simple, even for young QB’s.

Running the football is NOT what this is for, as sacrilegious as that sounds.  This is a change up for the defense, and something to add some new era flash to your offense.  Your kids will like it and get excited about doing it if you limit its use.  You are going to throw the football in these formations every single time, until you get a five man box.  Once you get your five man box you can call a run play.  Pick just one to use for this series.  Good ones to use are trap, Counter and sally draw.  Trap is obviously going to hit quickest, and sally draw is going to mimic a pass play.  What you choose is up to you.  In my personal opinion, sally draw would be the better choice as you will have a body on body, and the linebackers will most likely bail.

These are simple concepts that can be added to anything that you are already doing!  You can even incorporate them in to your base formations.  Whether that be wing-T or Pro-i.  use the same rules for the OL and WR and you are gold!  Please feel free to reach out with any questions! Subscribe to the email list to be notified when new articles post and be sure to follow me on twitter at @TheCoachVogt