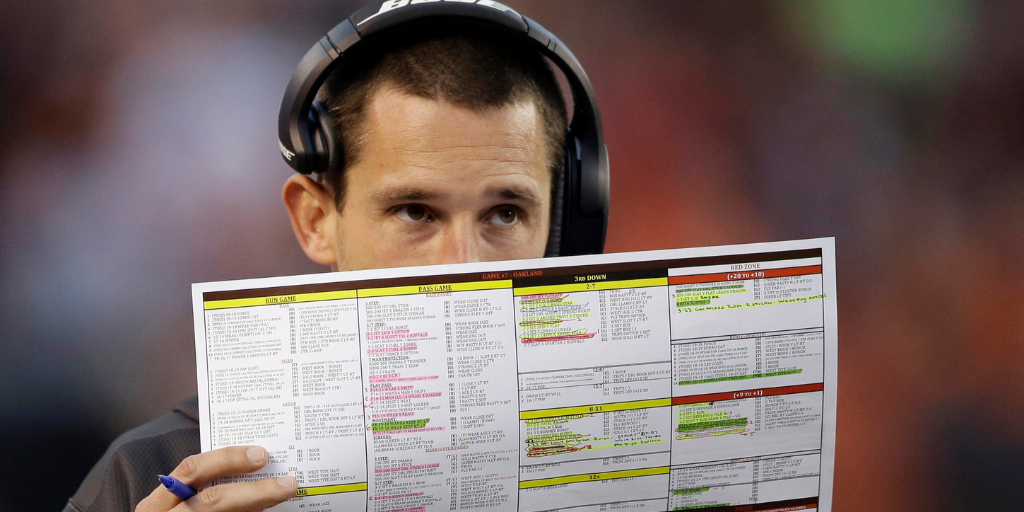 This article was written by Offensive Coordinator and Assistant Coach for Fairmont High School (MN), Brian Wille, founder of Intentionally Grounded. In this article, Brian speaks on his new approach to the design of his playbook, and how he was able to design it around his personnel and their offensive attributes.

A coach’s playbook can be his pride and joy, it is a collection and reflection of all of his vast knowledge of the game of football….or at least we as coaches think so anyway. It is this stigma that can often take a beautiful thing and turn it into a complete mess.

A playbook is not a test of your coaching intellect or your man/womanhood, it is an overview of the toolbox and system you plan on employing with your team. It serves as the map to assist you in your quest for success.

However, if the map cannot be deciphered by the reader, it is rendered useless. This is often the case with many playbooks. They are too complicated, too diverse, and too dense. I know this because that is how my playbooks used to look.

What are the dangers of such a playbook and how do you go about fixing it?

This article examines both questions.

We are all guilty of it. We turn on the television on a Saturday or Sunday, watch a college/pro game, and see a great play that we become instantly enamored by. It looks so shiny, it looks so successful, and it looks like it would work perfectly within your offense!

You install this play (among others) into your game plan for the week and then come Friday night, reality sets in. The plays don’t work. Why? Because they don’t fit within what you try to do on offense. They’re an anomaly. They don’t complement any of your other offensive plays and your players struggle to see the symmetry.

This is the reality of what many coaches around the nation deal with at every level. I am guilty of this too! While all of the plays we want to install have some merit and could potentially succeed in a game, the sustained success will rarely follow.

Sustained offensive success comes from an offensive system that runs a calculated set of plays that all complement one another. A hallmark of such success can be seen in a team that looks like they have 10-15 different run plays and 25 plus different pass plays when in reality they have three to four run plays and seven or eight pass concepts that they run a variety of different ways.

It wasn’t until this past offseason that I truly understood how much an offensive identity and system truly impacted our offensive production.

I had heard the same message that I am preaching to you now at various clinics, but when I got the opportunity to put my own playbook together, I continued to commit the same sin over and over by adding plays that didn’t match what we do.

We would spend so much time working on a set of plays and we would run them once or twice during the course of the game.

I looked back at all the valuable practice time we lost last year due to installing new, non-complementary plays within our offense and it resulted in disappointment.

Instead of getting better at the plays we pride ourselves on (our identity as an offense), I wanted to expand the quantity of the plays we could run. Did a few of the plays we installed result in some nice gains? Absolutely, but it didn’t make us a better offense overall.

As a result, I went into the offseason looking to refine our playbook and make our offense, and our players, more efficient.

How to Fix it?

I came across articles by coaches Phil Vogt and Slade Singleton that opened my eyes. Both preached simplicity and a limited playbook. After reviewing their materials (such as Slade’s Rule of 4), I realized how much deadweight our playbook carried.

Instead of minoring in everything, we needed to establish an identity to major in. This realization came full-circle for me when I was looking at our up-tempo or no-huddle package. I was struggling all season to implement the system to our offense because I could never figure out enough signals, or enough space on our wristbands, to include everything I wanted to include in our fast tempo packages.

I kept thinking, “Oh this play would be good….so would this play…..I don’t want to be left without this play…..” and I ended up keeping all of the plays like some sort of hoarder.

The reality of the situation is that by the time our players had to search on their wristband for the correct play, we weren’t even playing fast anymore. This is 100% my fault. The knowledge and guidance of Coach Vogt and Coach Singleton showed me that the old adage of “less is more” is absolutely a fact.

If we want to play fast, if we want to take our offense to the next level, then we need to figure out what it is we want our kids to know and then become experts in it.

Everything else we do, should complement these things and make them better.

The three keys to developing and implementing a successful offensive identify (in my mind) include:

1. No more than three to four different run schemes, quick game concepts, drop-back concepts, RPOs, and screens (i.e. Rule of 4 to some extent). This allows you to major in what plays are important to you and you can build in the plays that complement those base-plays best.

2. Matching your personnel with your system. If you cannot match the strengths of your players to your playbook, you will severely limit your overall potential. Don’t be afraid to change your system to accommodate a special or unique set of athletes that come through your program. Most high schools cannot recruit players to fit a specific system so you must be flexible and ready to adapt.

3. Run what you know. If you are going to teach your players to be successful, you must first know what you are talking about. Find an offense that makes sense to you. By nature, I’ve always been a Spread Offense and, most recently, an Air Raid guy. I never realized it until I read the book The Perfect Pass.

I had never been familiar with all of the Air Raid concepts; but as I learned more about them and compared them to the routes we were already running, it all began to make perfect sense to me. I understand the why behind the system and the how for teaching it. That tells me that the offense is something I can run and implement. If you cannot understand the why or the how then it shouldn’t be your system.