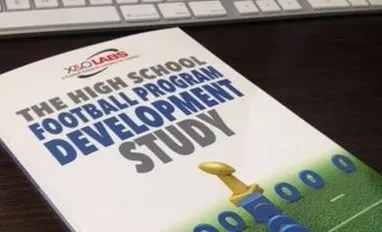 The following research is an excerpt from X&O Labs’ bestselling book, The High School Program Development Study.  MaxOne believes in the power of building a program and nobody offers better resources for this than X&O Labs.  This article is a great off-season read that includes best practices from coaches just like you.  For more information on this book, you can visit the X&O Labs here.

“Failing to prepare is preparing to fail.”  We’ve read this mantra in too many weight rooms, meeting rooms and practice facilities.  While it may be trite, it is profoundly true.  Successful head coaches master the art of preparation and this case is devoted to preparation.  It’s focused around off-season development of a football program, from strength and conditioning to developing team building to conducting practice.  We knew that many coaches were interested in this facet of the game, because it relationship to success is evident.  Here, we present our research on what makes those coaches “win” in the off-season and how they prepare themselves to win during the season.

But before we present our finding, it’s important to note we did something else that was totally different than previous reports – we segmented our research into separate areas.   We wanted to target successful head coaches in this research and while we’re quick to point out that success is not all about wins (there are certainly too many other variables that add into that equation) winning is truly the main benchmark that we used to separate our readership.  We decided to segment our research into the following groups:

Question:  How do you handle the strength and conditioning program at your school?

When surveying all groups, 47.5 percent of coaches say the head coach (themselves) handles the majority of strength training responsibility.   This was pretty consistent among all our groups- both successful and unsuccessful.  Many programs did not have a separate strength and conditioning coach, the largest group that did was a 20.9 percent response rate from those in Group 1- coaches that have won at least 75 percent of their games over the last three seasons.

Question:  How many days per week does your team work out during the off-season?

It seems that four days per week seemed to be the majority response-with over 52 percent of coaches from all groups selecting this response.  We did find that 40.7 percent of those coaches that won 25 percent of their games or less over the last three seasons lift three days per week during the off-season (below).

Question:  Do you conduct off-season mat drills in your program?

We defined mat drills as agility or plyometric drills done usually early in the morning to train discipline, speed and agility.  We found that 59.8 percent of all coaches are using a mat drill program while 40.2 are not.  A couple of interesting tidbits here.  Only 60.9 percent of coaches that have won at least six titles conduct mat drills during the off-season.  What was interesting here was that 67 percent of coaches from Groups 2 and 5 (those that have never won a title or won less than 25 percent of its games the last three seasons) do conduct mat drills.  Perhaps, the answer lies in the way in which these mat drills are conducted that equates to success.

Question:  How many days per week does your team work out during the season?

Question:  What is one thing you’ve established in the strength program that has made a tremendous difference in your program?

We focused this question around Group 1, or programs that have won at least 75 percent of its games the last three seasons.  Below are the responses we garnered.  We’ve also included coaches contact information in case readers are interested in following up.

“We time every lift so each player is accountable to themselves and each other.”- Matt McLeod, Grafton High School

We have been able to convince our principal that the strength program should be done inside the school day as a class. No longer are we burning coaches or players out with before school workouts and it encourages students to play multiple sports.  – Brian Crum,  Head Coach, Mt. View High School Bend Oregon

FAST program was designed by our track coach. F=Flexibility A= Acceleration S=Speed, T=Training. We do this 2 days a week in the summer and 2 days a week in the winter. It takes about 20 minutes in our gym to get our 30 guys thru a 6 station 3 minutes a station circuit. Speed kills. – William Magnusson, Head Coach, Firebaugh HS

We do a more single leg lifts, plyometric and lunge variations than the majority of teams. Football is all about change of direction and that comes from the amount of force you can generate from one leg on the ground. – Matt Hagebusc, Head Coach , Nowata High School

The best thing we have ever done in our program is to encourage our former players, who are college athletes, to come back and be positive mentors to our current players. We are very careful who we allow in, and they are aware of our strict expectations. This has really been a major plus. We have the older guys “adopt” some young guys to be their workout partners for the summer. This has  been building some pretty strong long-term friendships between the older and younger players. – Ron Jones, Head Coach, Hoosick Falls Central School, NY

We started posting lifting PR’s on a board and the team responded very well. – Keith Herring, Head Coach, Brentwood HS

Plyometric and many rep maxing instead of the old one rep max. – Matt Hunsaker, Head Coach, Central Valley HS

We have a Power Program in the summer three times per week after weight lifting that emphasizes quickness, plyometric and power. It is a great conditioner and confidence builder that our players have really bought into.  – Kim Nelson, Head Coach, Roosevelt High School

We started a Team Competition groups three years ago. Every year we seem to make minor adjustments. This year coaches selected ten captains who actually drafted their teams. It seems to hold more accountability for all involved because they now have ownership to their teams and each other. – Mark Bless, Head Coach, Avon High School

“We stress that our athletes participate in as many sports as they can.  If they can’t participate in an offseason sport we really stress weight room training.” – Kenny Schroeder, Canistota HS (SD) Lenny.Schroeder@k12.sd.us

“We don’t let them lift on their own. It is regimented. We have the 1st group do a set then we blow the whistle and the 2nd group does a set, etc.  It is up tempo and there is little standing around. This saves us time.  We build mental toughness in our weight room. We are up tempo and we go hard for about 1 hour or less. We lift at 6am so it requires a lot of mental discipline to get up and work hard.  Our student-athletes and coaches build their relationships and bond during these workouts. This is where we come together as a team.” – Pat Murphy, Capital HS (MT) pmurphy@helena.k12.mt.us

Question: What is one thing you and your staff has done to establish mental toughness in your program?

It seems like developing the mental side of the game continues to be of paramount important to coaches.  We wanted to find out what successful coaches were doing- either in season or out of season- to train the minds of their players.  Some significant responses are below.  Again, we addressed this question to those programs that have won at least 75 percent of its games over the last three seasons.

We do a self-inventory each year at camp that makes players take a real look at who they are rather who they perceive themselves to be. – Brian Crum, Head Coach, Mt. View High School Bend Oregon

Our staff is made up of Mentally Tough men who have been involved as competitors at the next level and know it’s demands. We do MTs=which are drills ( Bear Crawls, Up/Downs,or Buddy Crawls ) when we think we need them. We do Team Meals, Camp outs, and fund raisers together. We allow and encourage our athletes to play other sports. Wrestling and Track are great examples of individual sports that make you better at the TEAM sports. We are a D5 school who work together to build a Brotherhood amongst the Coaches and players. – William Magnusson, Head Coach, Firebaugh HS

We have a guest speaker come in each month, along with past football players who played for us. – John Magistro, Head Coach, Westerville Central

We have a Unity Council that is voted on by the coaches and the players. We have lessons on leadership with the unity council as well as the entire team. W also conduct weekly character lesson. For the physical aspect of the mental toughness as it relates to controlling the body and effort late in games, we have daily overtime sessions that we end each workout with. – Matt Hagebusch, Head Coach, Nowata High School

We hold optional meetings once a week to go over leadership, mental toughness etc. We do this in the spring for 10 weeks. Great dialogue and interaction between players and coaches. – Matt Griffis, Head Coach, Broad Run HS

We never specifically talk about mental toughness. It happens by building confidence, remaining positive in EVERY situation and being diligent to squelch any kind of negative or demeaning comment between players. We have a rule that you never yell at a teammate on the field. Our players know we have won the game when our opponent starts to “chirp” at each other. We look for it and feed off of it. It is hard to quit on someone you respect. It is easy to quit on someone who is harassing you. I also believe that the pace of our practice is challenging. We can see our opponents begin to fade in many games. – Ron Jones, Head Coach, Hoosick Falls Central School, NY

Mental toughness for us is rooted in the element of competition. We create the atmosphere that all jobs are always open. This promotes a greater output in the off-season and the ability to play tough during the year.

A couple things we emphasize is that we show no weakness…ever. We don’t bend over and grab our knees during drills. We control our facial reactions during fatigue. If we are banged up, we get to the sideline. After a big collision, we get off the ground before our opponent. I don’t even mind our players helping an opponent off of the ground, tapping him on the helmet, and reminding him that we will be here all evening and we will be meeting again, soon. – Luke Ethington, Former Head Coach, Maurice J. McDonough H.S., MD

Doing the “little things” makes you part of the herd…

But how does this explain a small group of programs winning multiple championships year after year?

The research staff at X&O Labs has found the answer. They’ve discovered programs that win more local and state championships do things differently than those programs that have not found success.

To clarify… you’re probably doing the same things as those championship programs, but they’re just doing them differently.

Every program does a summer workout, but championship programs do one thing slightly different than all the other programs that don’t bring home trophies.

And it doesn’t just stop with summer workouts. X&O Labs identified what they do differently during in-season workouts, and throughout the entire year.

So, if your program can’t get over that hump – or you’re struggling to get momentum in your program – X&O Labs’ High School Football Program Development Study is your best resource to jump-start your program and start winning championships.

For more information on how to purchase this book go here.