D-Line Play in the 3-3 Stack Defense 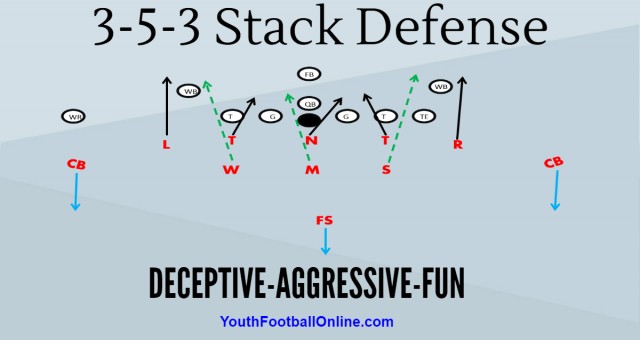 This article was written by Darrin Sheffer, Coach at Brentville District HS (VA), and founder of the Obsessed with Offense Blog. Coach Sheffer has recently transitioned into coaching defense, and has successfully utilized the 3-3 Stack defense into his system.

D-Line Play in the 3-3 Stack Defense

As a former Offensive guy I used to participate in the age old debate of “What Scheme best fits my players”.  Well, turns out that Defensive guys have the exact same debate.

One of the questions I constantly see on Twitter goes something like “I’ve got small/average sized lineman and we play teams that are bigger and stronger than us, what can we do about it?”

Well, I don’t claim to have all the answers for you Coach, but I would tell you that you may want to look into the 3-3 Stack Defense.

Even though I have only been in this defense for one season I really do believe that the Stack can get your smaller linemen in better positions for success.

The Stack is great for teams who have smaller/faster lineman, but even if you have bigger/stronger guys you could still run the Stack because it is extremely flexible.

The way that we run it at our HS fits our smaller guys better (our biggest lineman this season was 220 lbs) because our line slanted on every single play.

We had over 20 different calls for D-Line slants and stunts, but we had 4 main Slant calls we focused on: Strong, Weak, Pinch and Loop.

We believe that having our guys focus on their movement and slanting had them in better positions than the type of gap assignments you see in 4-3 or 4-2-5 defenses.

Techniques for D-Line in Stack

If you are thinking about going to the Stack you may need to rethink the types of techniques you are teaching your linemen.  Because we are focusing on using movement on each play, the speed of your players “get-off” and hitting gaps on the slants are more important than attacking O-Lineman shoulders.

You also won’t need to work much on bull rushing, instead focus on hand fighting and wrist control.  The point here is to be fast into the gap and get the O-line hands off of you.

The last thing we want in the Stack is for our small lineman to get into a stalemate with a bigger stronger guy.  Also, because of the fact that we have multiple movements up front, and multiple blitzes with LBs, the O-Line will have no idea where your players are going which can cause havoc up front.