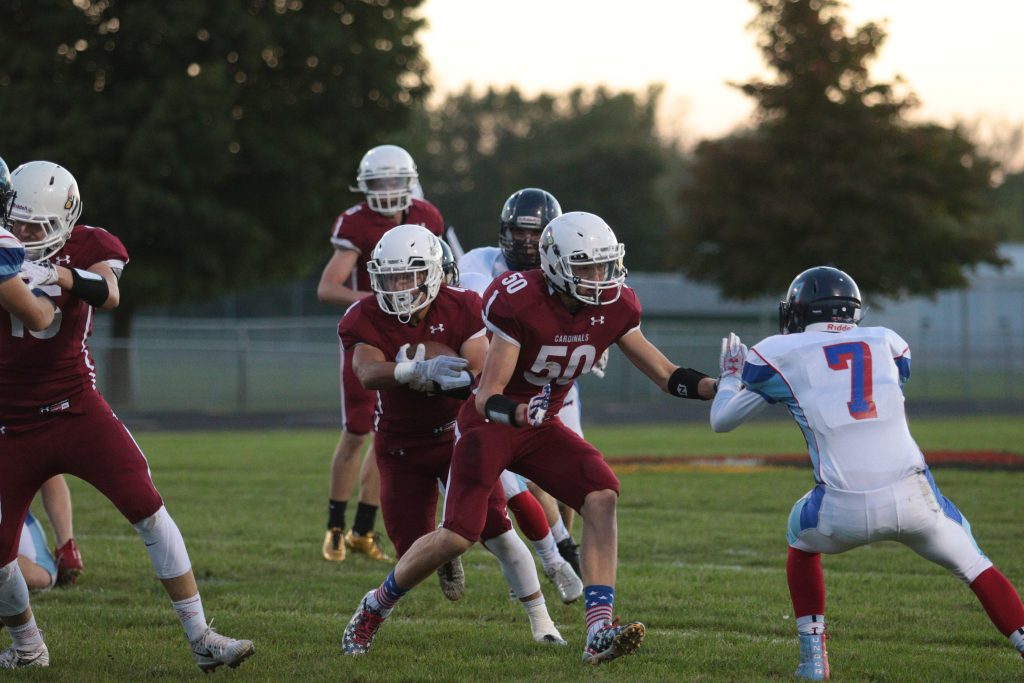 This article was written by Brian Wille, OC and Assistant Coach for Fairmont HS in Minnesota, founder of Intentionally Grounded. In his recent transition into coaching offensive line, he’s found that there are 5 things that offensive linemen must have to be successful at the position.

This past season was the first year that I was able to coach the offensive line. Prior to this year, I’d predominantly worked with quarterbacks and wide receivers.  I enjoyed coaching both positions very much, but as I transitioned into the role of offensive coordinator, I knew to coach the offensive line was a must. This is where everything gets started and I wanted to ensure that things up front were solidified in the manner we wanted in order to experience the offense we designed.

Let me say, it was quite the learning process!

I spent the summer preparing by reading every piece of offensive line literature I could get my hands on from Rick Trickett to Larry Manfull. This, coupled with input from our veteran linemen and ex-coaches I networked with, prepared me to teach the offensive line at an effective level….or at least I thought. There is so much to learn and I am still learning each and every day!  However, one of the biggest lessons that I learned this past season wasn’t about x and o’s or technique. It was about personnel. I learned about the qualities that I need to have in order for an offensive lineman to play in our system. I’ve since included these requirements in a lineman contract that I am going to ask all of my linemen to sign. This article examines the top five characteristics I look for in an offensive lineman and what led me to these preferences.

*Note: I’ve had one year of coaching offensive line experience. Most of the opinions I’ve generated were largely based on this past season, but my mentors have also influenced the qualities I look for in an offensive lineman.  This is a combination of both perspectives.*

The most important skill or trait that any offensive lineman who plays for us is their pad level.  I don’t care how strong you are or how long of arms you have, the low man wins in the game of football.  It is an undeniable fact and the sooner that our linemen embraces this, the better. Good pad level requires discipline and flexibility to perform consistently.  It becomes exponentially harder when linemen have to block in space, at the second level, or facing oncoming pressure. The best linemen have great pad level throughout; that is the most important thing we look for in all potential starters.

Along with pad level, quick feet are extremely important to us.  I am a believer in the importance of the 6-inch step in any blocking execution.  I am also a huge believer in the concept of “how quickly can you get your second foot firmly in the ground”. I know some coaches are not subscribers to the importance of the second step in the ground theory; but from my brief experiences (and the experiences of those I trust), the linemen who can get their second foot firmly in the ground at a fast rate are the ones who are typically generating movement along the offensive line.  Not only are quick feet important, but maintaining quick feet through contact is also a very desirable quality for our linemen.

When I say great hands, I don’t mean the ability to catch the football.  I’m more so referring to good hand placement. I find this to be one of the most underrated aspects of playing the position.  At the beginning of the season, our players were struggling with poor technique and weren’t generating any movement on double-teams or ‘kickouts’. When we looked at the film, hand placement was a huge issue.  It led to defenders sliding off of them, out leveraging them, and pushing them back. Once we corrected the hand placement issues and emphasized aiming points for our hands, we started to see some movement and execution.  We now drill hand placement drills every day!

I have to have a player who can keep their wits about them and keep their mental sanity when playing along with our offensive line.  We know it starts and ends up front in football. If our linemen are losing their composure and are worrying more about things that were out of their control, we are at the mercy of the defense who should be our sole objective and focus.  It is tough enough to handle all of the different stunts, blitzes, and fronts that modern defenses throw at us, why make it more difficult on ourselves by adding distractions? We emphasize remaining composed and looking at things analytically, rather than emotionally when it comes to our performance.

If you don’t want to play along with the offensive line, you probably won’t be very good at it.  You have to love it, you have to want to do it, and you have to be willing to sacrifice personal recognition and accolades for team recognition.  I truly believe that if you have the mindset that you can be an effective lineman and you enjoy working at your craft, you can turn into a serviceable player who works into the rotation.  Point and case: this past season I had an offensive tackle who was all of 6 feet and 160 lbs soaking wet. Going into the season, we assumed that this may be an issue for us and so we tried to create as much depth at the position as possible by getting other players reps.  However, our tackle never bought into the fact that he was undersized or that there was competition all around him. He focused on the task at hand and embraced all of the qualities I have listed above. Unsurprisingly, he was very successful and efficient. He completely shifted my philosophy on what it takes to play on the offensive line and size is not one of the requirements.