Words to Leave Them With 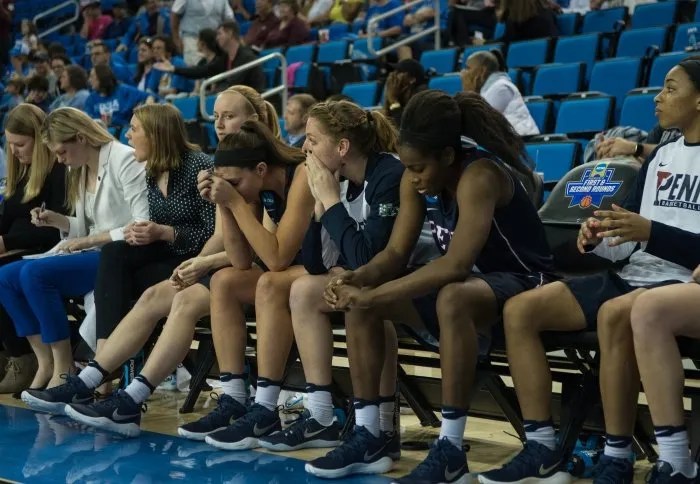 Amidst the madness of March, there are numerous story lines that we as coaches can learn from.  The Texas A&M vs. Penn Women’s first round tournament game was one that caught my eye.  Texas A&M ended the game on a 26-3 run to win by two, completing the largest comeback in tournament history. Over the last 8 minutes of the game Penn shot 22%, turned the ball over 7 times, while getting out-rebounded 16-7.  That’s a recipe for disaster.

The tale is told very differently depending on the bench you are sitting on.

We’ve all hung on to that hope before. If everything goes perfectly, we make a few shots and cause a few turnovers, that we can make the comeback. But 26-3 with your season on the line – that’s stuff dreams are made out of.

On the other hand – we’ve all been up late in the game.  When the players and the fans think the game is in hand, but we have an uneasy feeling as the “what-if’s” scenarios race through our minds.  It had to be one of the toughest post-game speeches that Penn Coach Mike McLaughlin ever gave.

“It was hard to go in that locker room to watch this group, because we had the game won, and they knew that, and it’s gonna be tough for them to process it,” McLaughlin said. “We talked about respecting the team, respecting our opponents, representing who we are at Penn, and we did that really well. The only thing we lost was that last eight minutes, because I thought we were really special for that first 32.”

It’s a defining moment as a coach – how do you pick your team up amidst what feels like utter failure. The words we choose in our last post-game speech of the season are important.  It’s a time remember, to teach one last time, and to speak from our hearts.