This article was written by Darrin Sheffer, Coach at Brentville District HS (VA), and founder of the Obsessed with Offense Blog. Coach Sheffer has recently transitioned into coaching defense and provides great insight for anyone that has coached on both sides of the ball…

Anyone who has followed this blog, or me on Twitter (@darrinsheffer) you may know that I have been critical on the Spread No Huddle/Up Tempo trend that has been hitting HS football for quite some time now.  However, it is my personal philosophy to be a Lifetime Learner and also have the ability to adapt/evolve my position on certain topics.  So, without any further ado here are 5 reasons why every HS Football program should consider going No Huddle next season (at least 5 that make sense to me) in no particular order:
1. Everyone’s Doing It!
OK, OK I know I just made some Old School Coaches out there upset, but before you stop reading out of anger please let me explain myself.  Unfortunately for us the culture of the Transfer isn’t something that has stayed at the college level.  HS players are now transferring to new schools left and right.
So what can we do about it as coaches?  One thing you can do is to make your program appear more attractive to players outside of your school.  How can you do that?  If you go to a No Huddle offense it will appear to outsiders that you are more Modern/With It than the Old School programs.  The key word here is Appear, which leads me to the next reason…
2. You Don’t Have To Change Your Offense 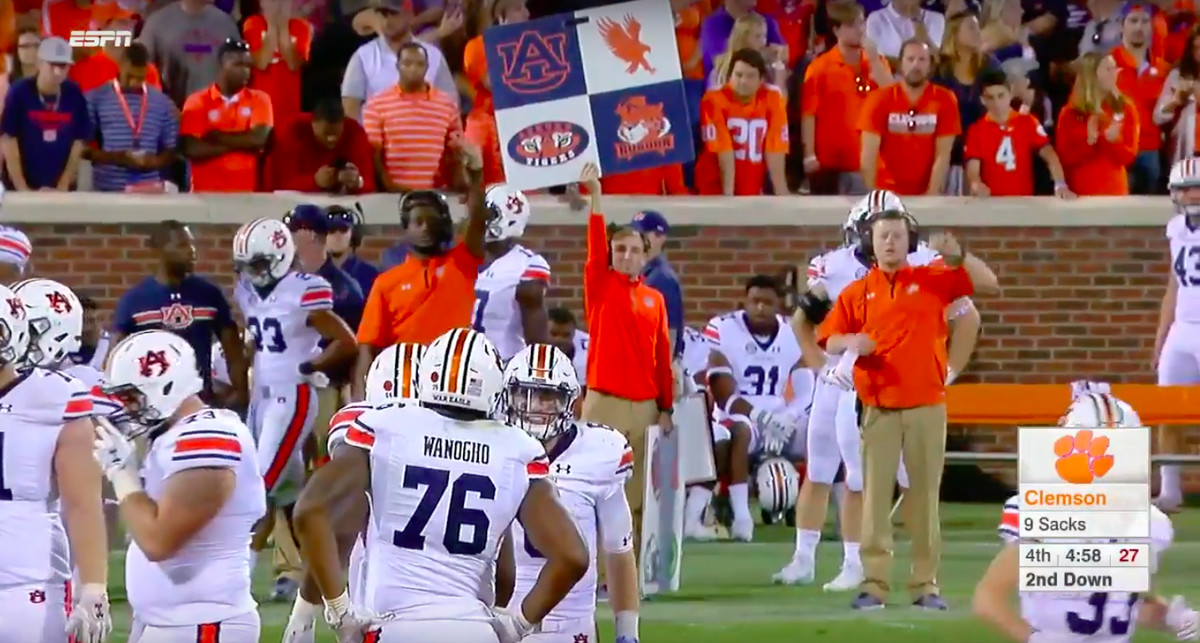 https://www.sbnation.com/college-football/2017/8/27/16211362/playcall-sign-cards-sideline
PSA: You don’t need to be a Spread/Up Tempo team to use No Huddle!  If you are a Triple Option team you don’t have to change anything about your X’s and O’s.  The only thing that changes is how you signal plays in.  Either it’s using boards, wristbands or signals the only thing you change about your offensive system is the fact that your players no longer huddle up to call the play.
3. Control of Tempo
When many people think No Huddle they also think Up Tempo or Hurry Up.  In reality that isn’t always the case.  I feel that it is easier in a No Huddle offense to control the tempo of the offense than in a traditional under center offense.  Many huddle offenses have to use two different systems of calling in plays when using their different tempos.  In a No Huddle offense you can have multiple tempos, but at the same time have the exact same signaling system which will make it easier on both the players and coaches.  Not to mention the fact that it will make practice time more efficient if you only need to practice one play call system.
4. Takes DC’s out of their comfort zone

https://giphy.com/gifs/mylabbox-key-nervous-peele-3oz8xLlw6GHVfokaNW
Defensive Coordinators don’t like to be rushed.  DC’s like to have time to figure out the down and distance, what does the opponent like to call in this situation, etc.  From a Defensive perspective facing a No Huddle attack makes you feel like you don’t have as much time to call the right defense, even if the No Huddle team isn’t going Up Tempo.  This can frustrate a DC into calling base/vanilla defenses or maybe go the opposite route and try to get too fancy, ether way you are taking them out of their comfort zone.
5. Can prevent Defense from Substituting

https://www.sciencenewsforstudents.org/blog/eureka-lab/these-young-researchers-take-aim-sports
Unless the rules are different in your area, the offense is not required to give the defense an opportunity to substitute unless you also substitute players.  Typically it is easier for the defense to sub in guys versus an old school huddle team.  When facing a No Huddle team, even if they don’t go Up Tempo it can be more difficult to sub in players.  This is very effective when your kids are in better shape than the other team.
Stay Obsessed